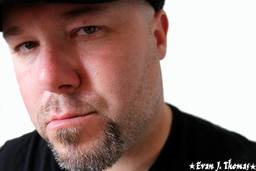 Evan started out as a professional photographer in the late 90's, covering Chicago bands like Disturbed, SOiL, From Zero, Lungbrush and more.  He's covered Lollapalooza's, Carolina Rebellion, Riot Fest, Chicago Open Air and Rockapalooza festivals.   He has photographed everyone from local bands, emerging talent and over a dozen Rock and Roll Hall of Famers.   He is a Publicist with the worldwide agency TAG Publicity, he is the owner/ founder of the Bad Ass Art and Music Show, the host of the Bad Ass Podcast, Owner of Bad Ass Productions, he books and promote shows around the Chicago area and NW Indiana, he hosts of The Underground Sessions show.  He has also recently pitched 2 TV shows to AXS TV.

My goal in the industry is to help talent become the best they can be.  Helping them with my knowledge of the music industry from the Media and Business side and what it takes to enhance their talents to the next level of success.  I am passionate on helping the Chicago scene get back to prominence as well as guiding others to emerge and flourish.

Head of booking and talent manager for Bad Ass Productions/ Planet Rage Media, LLC.  Dominic brings a wealth of knowledge in the industry having success managing the band Bullet To The Heart.  His 2018 signing of Chicago metal band Stitched Apart, Dominic looks to propel them to a top local and national act. Dominic's bands have opened for major rock bands including Avatar, Ded, Red, Butcher Babies and many more!